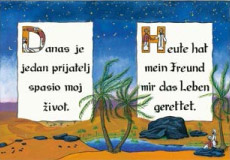 Two friends made a journey together through the desert. And they talked as they walked.

One day they began to argue. It was such an intense and passionate dispute; one that only breaks out between those who are close and important to each other. Eventually one of them became distraught, feeling completely misunderstood. It got so bad that he raised his hand against the other and hit him. His friend didn’t say a thing but turned away, knelt and wrote with his finger in the sand:

Today my friend has beaten me.

Then they continued on their journey. Soon they talked again and before long they made up.

A few hours later they reached a lush oasis. And there by a large dark rock and surrounded by tall palm trees was a beautiful lake. Tired, thirsty and dusty as they were, the two of them rushed with joy to the pond. One of them slipped and fell in the pool. Now, not all desert dwellers can swim and he was in danger of drowning. Without hesitation his friend grabbed a palm tree with one hand and with the other he pulled his friend out of the water.
The one who had been saved went to the large dark rock and with his knife scratched into the stone:

Today my friend has saved my life.

As the two of them a year later made the same journey, they came upon the place where they had argued. But the wind had long since scattered the words once written there.

But shortly, when they came to the oasis, they saw there, still clear on the dark rock:

Today my friend has saved my life.

We are having this story in various languages. To change the language, just click on the respective flag !!